On a nice, warm Saturday afternoon a good crowd had gathered at Broadway Cinemas in Myrtle Beach, South Carolina. We were there to watch Hellstorm, a documentary by Kyle Hunt and Tom Goodrich, illustrating the horrific and oftentimes unimaginable treatment of the German people after World War II. As well done as the film is, it is certainly not for the faint-hearted, but nonetheless it is still imperative for every person of European descent to see this for it gives us a glimpse of what could happen if the Jews have their way and do successfully implement their New World Order. 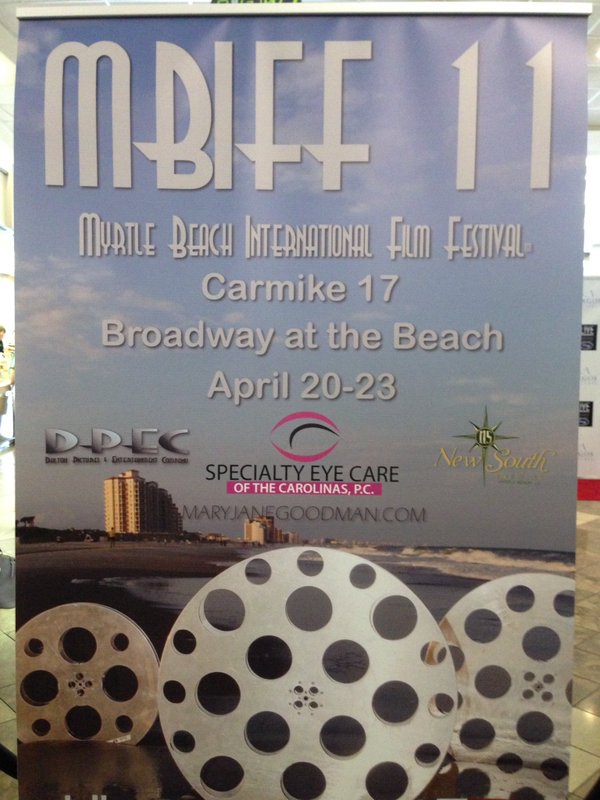 Narrated by Renegade Tribune’s own Sinead McCarthy, it was almost surreal to hear her voice coming out of big theater speakers instead of my computer. It felt like a big moment, to have a film that presents the other side of the story, the side we never get to hear because it’s been silenced by Jewish opposition, was actually playing in a large movie theater and even drew a good crowd considering the subject matter. It was not easy to sit through an hour and a half of rape, torture, and genocide of millions of innocent men, women, and children. The most stomach churning part pointed out that some German women were forced at gun point to have sex with dead, rotting corpses. This seemed to be the breaking point for some audience members because after that a few got up and walked out. Most stayed however, and to my pleasant surprise they did not all walk out when the Jewish element was brought into the picture, although this was a point which unnerved some, as I would later find out.

Once the film was over, most of the audience applauded. The lights came up and Kyle Hunt was then brought out for Q & A. Sporting a ponytail and a nice blazer, Kyle reminded me of the hipster guys I used to see when I hung out at the local liberal coffee shops back in my twenties, certainly not an evil “Nazi” type of guy.

The first comment he received was from a young man who was upset with the Jewish element of the film. It was something along the lines of, “Oy vey! Why did you have to point out these guys were Jews? What does that have to do with anything?”

Kyle pointed out to him that the Jewish element had everything to do with it and then moved on because the guy’s kvetching was irritating him as well as taking time away from other people’s questions. Kyle also took the opportunity to point out to the audience that in many countries a person can be put in jail not just for questioning the validity of the Holocaust, but simply for questioning the six million number, even though at Auschwitz the plaque with the number of people killed has changed from originally claiming four million to now just 1.5 million. I was never good at math, but I’m pretty sure that changes the six million number just a little bit.

A few other audience members commented that they felt the film was “one-sided” even though Kyle explicitly says that in the beginning of the documentary that they only wanted to focus on the German side. I can’t help but find these people’s opinion of one-sidedness patently absurd since we have heard ONLY one side for seven decades. There have been thousands of books, films, and TV series dedicated to the Holocaust. Impressionable children in middle school are instructed to read The Diary of Ann Frank, a book which should be flushed down the toilet for how full of shit it is, but not once did we ever learn about what the Germans suffered through. Indeed, all we have ever heard is, “OMG! Those evil Nazi’s!” I would wager that every single one of us had a history teacher who referred to Hitler as the devil incarnate; one of my history teacher’s actually told us the story of the lampshades and soap as if it was real even though it’s been proven to be a hoax.

After the brief Q & A, we all filed out into the theater hallway. I asked a few audience members what their thoughts were on the film. One middle aged woman named Cindy commented that she felt the film was one-sided and was very unhappy with Kyle for using the word “alleged” to describe the atrocities of the Holocaust, which was very real in her mind since she had been to the Holocaust Museum and saw the shoes of the little Jewish children that were killed. I asked Cindy’s mom what she thought of the film and got a more direct answer: “I hated it.”

I will give them credit for at least being willing to watch Hellstorm and to sit through the whole thing, but it saddened me that even after learning about the truly horrific, evil, and barbaric treatment the Germans were subjected to, they still could not shake their Jewish programming. To them the Jews are the biggest victims of all time and always will be.

I’m going to assume that most, if not all, the people reading this know that the Holocaust is a made up Jewish lie, but let’s suspend reality for a moment and say that it actually did happen as they claim. Although that would have been horrific, it would still be nothing compared to what the Germans suffered after the war. The narrative is that the Jews starved to death in concentration camps or executed. Meanwhile, German women were raped to death, literally crucified with nails hammered into their hands, and as I mentioned earlier, sometimes forced at gun point to have sex with the corpses of dead men on the streets of what was left of Germany. German men had their testicles crushed and some were forced to eat their own excrement. Which would you rather suffer? At least starving to death you could die with some type of dignity.

In conclusion, Kyle made an excellent point at the end of Q & A; he pointed out that no one on Earth should ever have to suffer anything like this ever again and that is the point of watching a film like Hellstorm, to know what happened and what could happen if we don’t put a stop to it now. What I wish some of the more critical audience members could understand is that the Jews want Hellstorm for the entire world. We don’t have to go down that road. If enough people would wake up to world Jewry and understand how much damage the Jews have done and how intent they are on creating far more than what the Germans experienced, we can prevent another Hellstorm, and if we have to use violence to defend ourselves, so be it. Every white person, and even non-white for that matter, should be ready to do whatever it takes to defeat the Jews so that future generations can thrive, live happily among their own, and never suffer anything like this ever again.

I want to personally thank Kyle and Tom Goodrich for being brave enough to take on this subject matter and to spend the time, money, and tremendous effort it took to make this film. Most people simply parrot whatever is fashionable or “politically correct” so it takes some guts to show a film like Hellstorm at a film festival and be willing to stand there and take criticism from brainwashed people without flinching once. Hellstorm made me realize how much we’ve lost and how much we still stand to lose.

2 thoughts on “Hellstorm at The Myrtle Beach International Film Festival”